A History of our Great Market

When the Normans arrived in Norwich after the Conquest, they established a new Borough to the west of the Castle. They also established a new market in what became known as the French Borough.  This market has been at the heart of Norwich ever since.

At the height of the Middle Ages the Market stretched from the Guildhall to St Stephen’s Church. Its importance grew as Norwich became one of the richest towns in the country with its booming woollen cloth industry.

But the centre of the Market has always been the area between St Peter Mancroft and the Guildhall. The Upper Market, which featured permanent stalls for meat and fish traders and woollen and linen sellers, was on what is now St Peter’s Street and the pavement leading to the Memorial Gardens.

A range of buildings gradually grew up along the area now occupied by the Memorial Gardens, splitting the Upper from the Lower Market. Narrow passageways provided access between the two sections of the Market. Pudding Lane is a survivor from this time.

The Lower Market, which became known as the Great Market and roughly occupied the area covered by market stalls today, was orginally a space used by people from the countryside, who visited on Market Days to sell their wares.

Thomas Baskerville from Abingdon wrote an account of a visit to Norwich in 1681 and described the Market: “A little way from this castle on the opposite side of a hill, is the chief market place of this city…they not as in London allowing markets in several places, make it vastly of provisions, especially on Saturdays, where I saw the greatest shambles for butchers’ meat I had ever yet seen, and the like also for poultry and dairy meats, which dairy people also bring many quarters of veal with their butter and cheese, and I believe also in their seasons pork and hog meats.”

The Market Cross used to be in the middle of the Great Market. The last cross, which was built between 1501 and 1503, was a magnificent structure, 21.5 metres high and 9 metres wide. It was pulled down by the city authorities in 1732, because it was thought to be too expensive to maintain.

The foundations were revealed during the 2005 revamp and the Cross’ circumference has been marked in red near the front of the Market.

The Market area also has a more grisly past, hosting many public punishments. The stocks and pillory were at the east end of the Guildhall. It was also a centre for executions, including 49 of Kett’s rebels who were hanged by the Earl of Warwick, close to the Market Cross, in August 1549.

On a more cheerful note, the area has always be a centre for entertainment. On Mayor making day, a colourful procession used to head from the new Mayor’s house to the Guildhall, which was built between 1407-1413 to be the main civic meeting place.

Street entertainers have been part of the Market scene for centuries, along with lively pubs. There used to be more than 30 pubs in the area. Today, the Sir Garnet and Sir Toby’s Beers maintain the tradition.

St Peter Mancroft Church, founded by the Normans and rebuilt as the main civic church between 1430 and 1450, is also the Market church.

A Market For Our Times, Norwich Heritage Projects (2010) www.norwich-heritage.co.uk 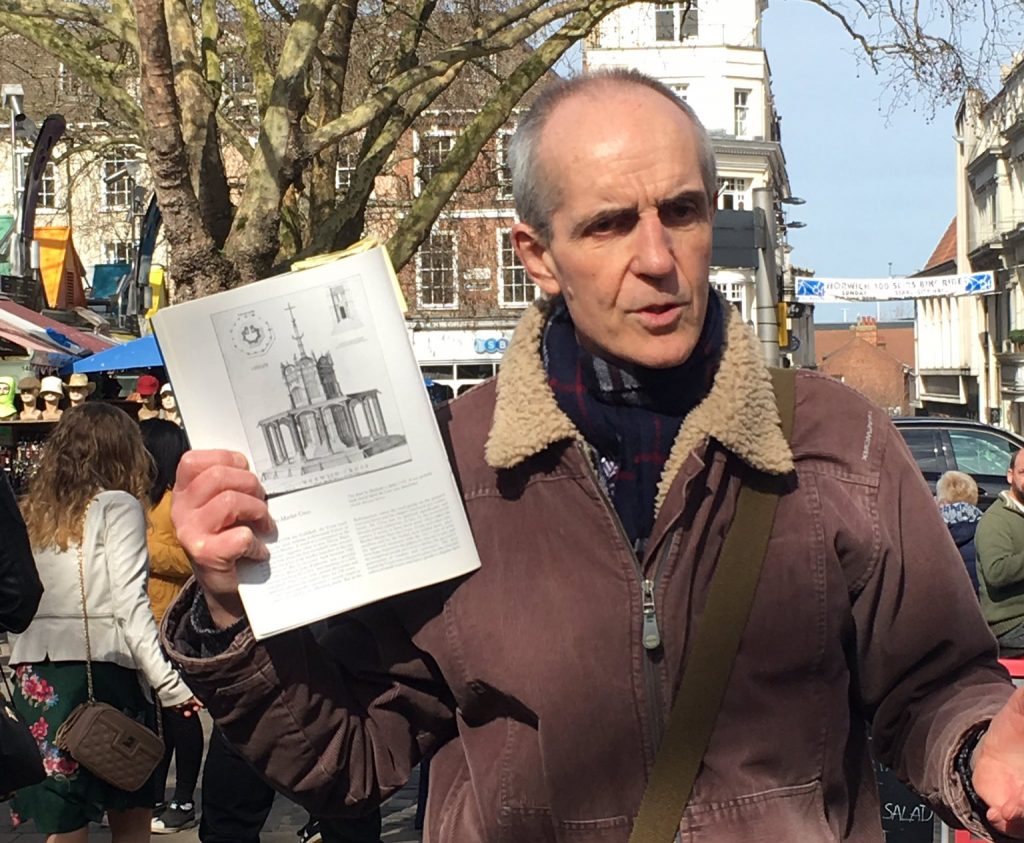 A 1½ hour guided tour in and around Norwich Market, celebrating 940 years of buying and selling at the heart of the city, including sampling the food on offer at today’s market stalls*.

The tour looks at the impact of the Normans; the growth of the Medieval Market and the Paston Letters; the great church of St Peter Mancroft; the role of the Tollhouse and later the Guildhall; the market as a place of execution and entertainment; the long lost Market Cross; the coaching era, the inns and the diaries of Parson Woodforde; pubs, banking and the Victorian era; shoemaking and the story of Start-Rite; the building of City Hall and redevelopment of the market in the 1930s and 21st century changes.

Includes a cup of tea at Birchley’s Loose Leaf Tea

This website uses cookies to improve your experience while you navigate through the website. Out of these, the cookies that are categorized as necessary are stored on your browser as they are essential for the working of basic functionalities of the website. We also use third-party cookies that help us analyze and understand how you use this website. These cookies will be stored in your browser only with your consent. You also have the option to opt-out of these cookies. But opting out of some of these cookies may affect your browsing experience.
Necessary Always Enabled
Necessary cookies are absolutely essential for the website to function properly. This category only includes cookies that ensures basic functionalities and security features of the website. These cookies do not store any personal information.
Non-necessary
Any cookies that may not be particularly necessary for the website to function and is used specifically to collect user personal data via analytics, ads, other embedded contents are termed as non-necessary cookies. It is mandatory to procure user consent prior to running these cookies on your website.
SAVE & ACCEPT
Scroll to Top